Proprietary protocols are things from yesterday. Today, Opensource technologies are taking over the world! AOL / ICQ has just launched a test server using XMPP, an open technology. This means that you’ll soon be able to talk to your ICQ / AIM contacts via Jabber. Google has already started using it. So who’s next? MSN!

AOL seems to be making its ICQ and AIM services compatible with XMPP: xmpp.oscar.aol.com PS: it’s still buggy and is only claimed to work in Exodus and Coccinella. It works in nearly all Jabber clients. But that is probably because the server is overloaded.

There has been a vivid discussion today on the Jdev MUC room about this. It looks like Jabber will be the solution which will rule the future of all messengers.

You can try to log in to ICQ with the username icqnumber@aol.com on server xmpp.oscar.aol.com on port 5222. TLS is required.

Let’s see what happens in the next few months with Jabber.

You can find Jabber Hosting for your Domain on Flosoft.biz . You’ll probably be able to chat to your ICQ contacts soon!

UPDATE: AIM seems to work too!
UPDATE2: There is a tutorial here on how to setup your Jabber Client
UPDATE3: I just recieved this picture from jjkobra. It works with Gajim! 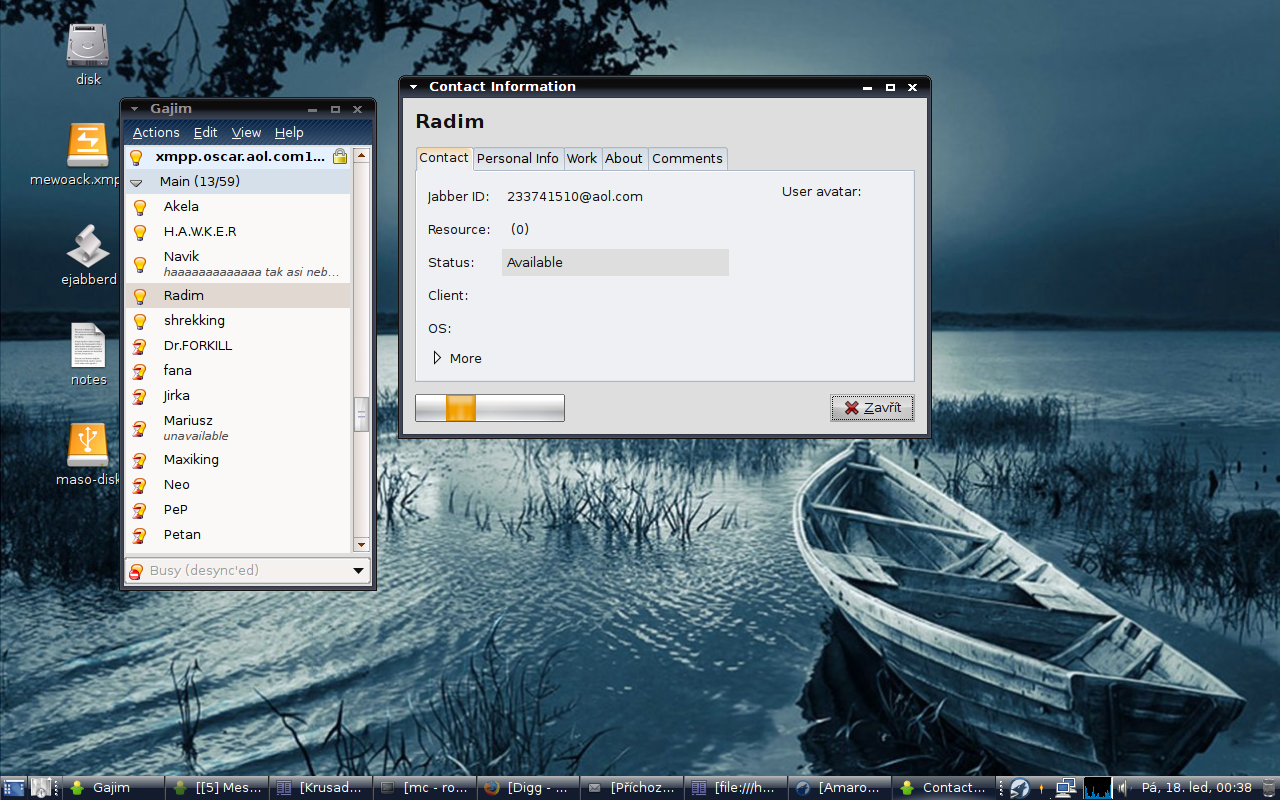 UPDATE4: It seems to work in Psi too!
UPDATE5: A comment by AOL:

Thanks for blogging about our commitment to openness. We’ve been working
really hard over the past few years in making all of our services more
open and standards based, working with the SIP as well as the
Jabber/XMPP communities. Our XMPP gateway at xmpp.oscar.aol.com, which
we’ve been working on for a while now, is just one approach we’re
tinkering with. As you pointed out, though, this particular server at
xmpp.oscar.aol.com is a test server, so I wouldn’t count on it being
reliable or even continuously available until we put some more work into
it to bring it up to our standards.

In the meantime, keep your eyes open for more announcements from us
soon. We’re excited by the work we’re doing and the support we’ve
received from the broader internet community and hope you’ll be just as
excited by what we’ve got to offer.

Today I discovered a very interesting initiative. It is about Data Portability. This might be the future for all websites and internet related applications. As a user, your profile, contacts, photos, videos and any other form of data is stored on the service providers

Hey everyone, some really cool news. Flosoft IM Server is the first choice in AdiumX 1.2! I was told today, that we are the first in the registration dialog for XMPP. Here’s the evidence: This is what we get for our long